Beyond Nuclear was designed to answer the question: ‘Why would we in Scotland want or need to have nuclear power stations when we have almost unlimited potential for clean, renewable

Beyond Nuclear was designed to answer the question: ‘Why would we in Scotland want or need to have nuclear power stations when we have almost unlimited potential for clean, renewable energy production?’ The conference will therefore be a day of two halves, starting off with an examination of the negatives involved in nuclear power production in the first session, contrasting with the positives of clean renewable energy in the second.

Lynn Jamieson (Chair of Scottish CND) will lead off by establishing the link between nuclear power and nuclear weapons, followed by Rae Street from CNDUK who will talk about their campaign ‘No to Nuclear Power’ concentrating on ‘expensive, dirty and dangerous’.

Next up will be the well known radiation consultant Ian Fairlie providing us with an update on the situation at Hunterston, and he will be followed by Sean Morris (Principal Policy Officer UK & Ireland NFLA (Nuclear Free Local Authorities)) on the unfortunately typical lack of preparedness for any nuclear incident whether involving weapons or power stations.

After a short break for lunch Mike Danson (Professor Emeritus Heriot-Watt) will start the afternoon session off with an overview of renewables in Scotland, and David Toke (Reader in Energy Politics Aberdeen University) will be demonstrating the capability of renewables to supply not just Scotland’s but 100% of the UK’s energy needs.

Following on will be Pete Roche of No2 Nuclear who will explore the jobs aspect particularly in relation to ‘Just Transition’, and the conference will conclude with Linda Pentz Gunter, (Founder of beyondnuclear.org) who will be looking at the day’s input in relation to climate change.

Both the morning and afternoon sessions will be followed by a Question Panel managed by the conference Chairperson Arthur West, and additionally the day will incorporate multiple networking opportunities under the care of our Media and Networking Team Alannah Maurer and David Newbigging.

‘Beyond Nuclear’ was originally scheduled to take place in March 2020 at Adelaide Place in Glasgow, and had to be postponed twice due to COVID. Many thanks to the team at Cameron for helping us to get our conference online, and we are grateful too for the legacy left to Helensburgh CND by the veteran anti-nuclear campaigner Eric Wallace who died in December 2016 – his legacy has helped this conference to be staged. And a final thanks to Twitter’s King of Jockistan for permission to use his photograph of Hunterston for our ‘Beyond Nuclear’ graphic! 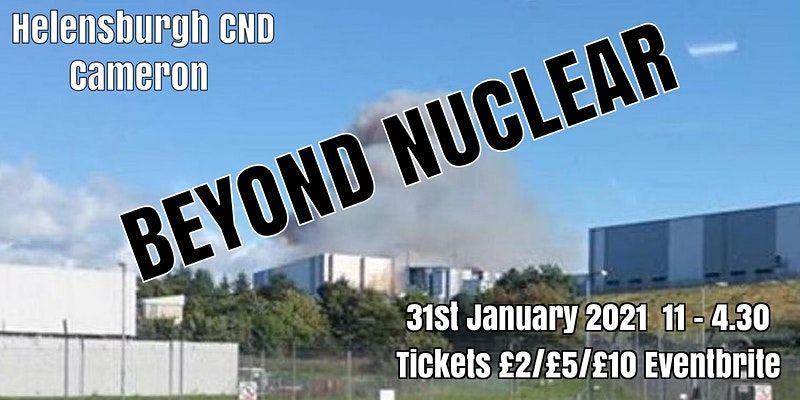