Disarm for Our Planet

Why does it matter? Conflict and militarism are among the biggest contributors to climate change. Any nuclear conflict would cause climate catastrophe overnight: changing weather patterns, plunging billions into famine, and devastating

Why does it matter?

Conflict and militarism are among the biggest contributors to climate change.

Any nuclear conflict would cause climate catastrophe overnight: changing weather patterns, plunging billions into famine, and devastating the Earth’s ecosystems. No climate justice is possible until all nuclear weapons are disarmed.

But the catastrophe isn’t just waiting to happen sometime in the future. The military is one of the biggest contributors to carbon emissions, in the UK and in other countries. Government promises on climate change – for whatever they’re worth – barely even acknowledge the military problem.

And every stage in the lifecycle of nuclear weapons, from mining uranium for warheads, to the impossibility of safely disposing of nuclear waste, is seriously damaging to humankind, to our natural world and to the survival of our planet as a whole – and that’s before we account for the impact of accidents, nuclear ‘tests’ and attacks. We are already paying an enormous and unacceptable price – which, once more, falls largely on the shoulders of the world’s poorest and most disenfranchised communities. It’s time for change.

What are we doing?

Join us on Sunday 26 September (the International Day against Nuclear Weapons) for a die-in at 3pm to call on the Government to “Disarm for Our Planet” ahead of COP26.

The main die-in will take place outside Faslane naval base, and all are welcome to join us there. Please observe the COVID-19 restrictions in force at the time, and respect the choices and the personal space of others who may be taking additional precautions for their own safety.

If you are not able to join us at Faslane, consider organising a die-in at a local site of significance: whether that’s an important environmental site, a site likely to be affected by climate change, or a site where you can draw attention to the impact of the military or the responsibility of governments to take action.

Contact [email protected] to let us know what you’re planning, and we’ll promote the event to other supporters near you!

What’s the theme and the message?

The die-in will be marine / wildlife themed, drawing attention to the environmental cost of nuclear weapons. Come dressed as a sea creature of your choosing, and/or bring posters and banners to share the message!

If you have a slogan or a message to share, please let us know and we will add it to the list! The more inspiration, the better. Contact us on [email protected] to share your suggestions.

Where can I learn more?

If you want to understand more about the serious links between nuclear weapons, environmental damage and climate change, why not start with these three stories?

Wildlife at risk: A pod of bottlenose whales in the Gare Loch were directly affected by military exercises last October, with one found dead shortly afterwards. Only a couple of months earlier, a string of unusual sightings and stranding of beaked whales was linked to military sonar exercises, which were thought to have scared the animals into surfacing too quickly, and causing them to suffer decompression sickness.

Radioactive Waste in our Waters: Among the many problems posed by the Fukushima nuclear disaster, ten years ago, is the impossible question of how to safely dispose of its radioactive wastewater. Japanese government plans to dump it into the Pacific Ocean – with who knows what consequences for marine ecosystems, and for human and animal health – have attracted serious criticism and concern.

A Climate Change Double-Whammy: Although nuclear weapons have only been used once in times of war (the dreadful bombings of Hiroshima and Nagasaki in 1945), there have been over a hundred detonations of nuclear weapons on our planet since the 1950s. These have caused terrible damage to human health and to our environment, and climate change is forcing us to reckon with their legacy once more.

Following US nuclear tests in the Marshall Islands, the US dumped its nuclear waste in a blast crater on Runit Island and covered it with a concrete cap. As the Marshall Islands face rising sea levels, it’s feared that the concrete dome will be fatally damaged and collapse, releasing an enormous quantity of radioactive waste into our oceans.

Perhaps more slowly, but inexorably, it will happen here too. Recent mapping has shown that Rosyth dockyard will be submerged by rising sea levels within the next 30 years. Meanwhile, the UK government continues to drag its feet on dealing with the ageing hulks of nuclear submarines that have been left to rust there, with no serious commitment to dismantling them.

Please join us at 3pm on Sunday 26 September – meet us at Faslane, or organise a die-in locally and share your event photos and videos with us! Get in touch with [email protected] to find out more, or just show up on the day. We look forward to seeing you there. 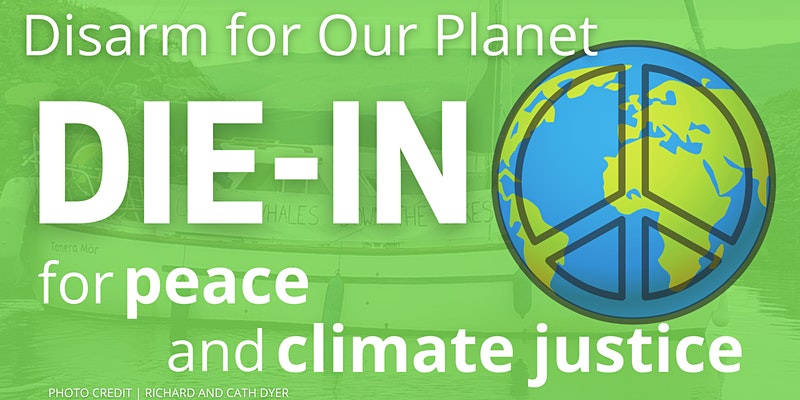