Panel discussion on climate policy in Europe, from local emergency declarations to foreign affairs, followed by expert comments and Q&A.

The end of 2019, the European Parliament declared a climate emergency. One and a half years later, efforts to fight global warming are made across the continent and beyond, from local climate emergency declarations to introducing a climate dimension into foreign policy. Yet, much more is to be done. Climate change remains one of today’s most pressing challenges. Only a green EUrope is a EUrope fit for the future.

This engaging panel will explore different approaches to climate policy in Europe, from the local level to foreign affairs, and how they can be improved. The HQ Climate team, led by Dr Candice Howarth (LSE), and the 89 Belgium Climate team, led by Prof Richard Youngs (University of Warwick/Carnegie Europe), will be presenting their research and policy recommendations for shaping a EUrope fit for the future.

Their presentations will be followed by comments and questions by our expert commentators, Erica Hope from the European Climate Foundation and Olivia Lazard, who is a visiting scholar at Carnegie Europe, before opening the virtual floor for audience Q&A.

⬇️ Find out more about the research teams and our commentators below.

Within the framework of the Green Deal, the proposed EU Climate Law commits the EU to carbon neutrality by 2050 and Member States are increasingly bringing their national policies in line with this aim. However, the EU only accounts for 10% of global greenhouse gas emissions. Internal action is not enough. To address this problem, the Green Deal calls on the EU to become a ‘Global Leader’ that encourages partners around the world to match its own climate ambition. Policy proposals to highlight how this goal can be achieved will be presented and discussed.

This team is part of the 89 Initiative – College of Europe collaboration.

📌 Erica Hope leads the European Climate Foundation’s initiative on Climate Planning & Laws. This hosts the 2050 Task Force: a cross-sectoral effort to build evidence and understanding of how to deliver net zero greenhouse gas emissions by mid-century, and to drive the adoption of long-term strategies and laws to realise this at EU and national levels. She has previously worked for ECF’s energy efficiency and UK programmes.

Before joining the ECF in 2013, Erica led the policy and advocacy activities of NGO network Climate Action Network Europe on energy efficiency, from where she helped to establish the influential Coalition for Energy Savings. From 2005-2009 she was parliamentary adviser to Green MEP Caroline Lucas. She has also worked at the Institute for Public Policy Research in London, and has an MA in Human Sciences from Oxford University.

📌 Olivia Lazard is a visiting scholar at Carnegie Europe. Her research focuses on the geopolitics of climate, the transition ushered by climate change, and the risks of conflict and fragility associated with climate change and environmental collapse. She has over twelve years of experience in the peacemaking sector at field and policy levels. With an original specialization in the political economy of conflicts, she has worked for various NGOs, the UN, the EU, and donor states in the Middle East, Latin America, Sub-Saharan and North Africa, and parts of Asia. It is also through fieldwork that she came to observe the ways in which the plundering of ecosystems feeds conflict systems across the world and contributes to climate disruptions. Prior to joining Carnegie Europe, Olivia set up her own consultancy firm, Peace in Design Consulting, which remains exclusively active in conflict and fragile zones. 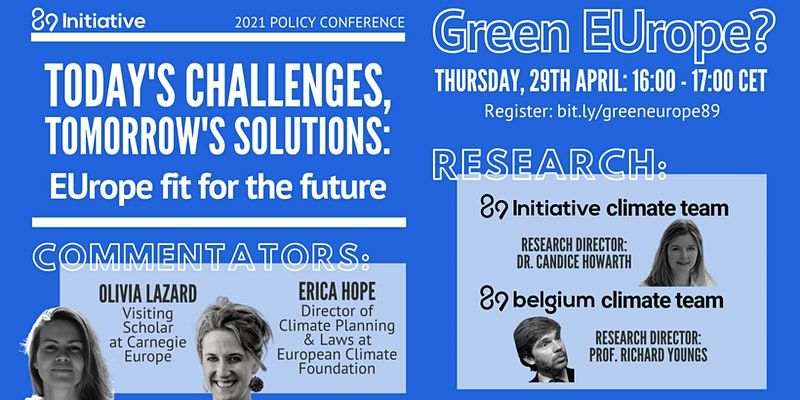