OCS are collaborating with ISIS magazine to present their first multi-lingual event, focusing on Extraction Education.

OCS are collaborating with ISIS magazine to present their first multi-lingual event, focusing on Extraction Education. This event is unique in that all the panelists are from Indigenous backgrounds and offer their perspectives on the topic.

‘Extraction education’ describes the process by which mining companies own educational institutions that teach tribal communities. They are clearly aimed to reduce anti-mining opposition from indigenous groups by changing attitudes towards mining and other extractive processes to groups that would have otherwise protested against their proliferation. There are many parallels to the institutional schools that grew in North America and Australia in the 19th and 20th Centuries to ‘civilize’ and ‘educate’ the indigenous populations there. In fact, these mining schools have been accused of ‘cultural genocide’ by various indigenous groups and academics around the world.

In this event, we will discuss the ways these industries affect indigenous youth and their views on mining. We will also look at examples of opposition movements to these projects and examine ways in which such institutions can be held to account.

Katy Machoa, of the Kichwa people (community of Shamato), has led the Women section of the Ecuadorian indigenous organisation CONAIE from 2014 to 2017. With the campaign

“Resistir es mi derecho”, she contributed to the defense of human and collective rights on the national and international level. In addition to this, she actively defends intercultural schooling and fights for a fair access to higher education for all peoples and nations of Ecuador. Katy has a Master‘s degree in Latin American Studies from the Universidad Andina Simón Bolívar (Quito) and currently works in a research project of the “Centro de Derechos Económicos y Sociales in Ecuador.” Topic of her research is the role of indigenous Ecuadorian women in constructing a plurinational and intercultural democracy.

Soni Sori is a Koya Adivasi school teacher turned people’s leader from Sameli village of Dantewada district in south Bastar, Chhattisgarh, India. She was arrested by the Delhi Police’s Crime Branch for Chhattisgarh Police in 2011 on false and fabricated charges of aiding left wing cadres. During her imprisonment, she was tortured and sexually assaulted by Chhattisgarh state police and suffered huge mental torture as well. She was acquitted in six of the eight cases filed against her due to lack of evidence. After release from prison on bail in two other cases, Soni began campaigning for the rights of indigenous peoples, in particular criticising police violence against tribes people. In 2018, Sori won the Front Line Defenders award. She is a fearless Adivasi woman activist and despite the continued harassment – both physical and mental – by the state she has stood her ground to fight for the rights of her Adivasi community. The confidence women have in her has helped her expose several sexual ASSAULT and fake encounter cases by security personnel. She is currently at the frontline of the Adivasi people’s resistance against the mining of the sacred Nandraj Hills in Dantewada, the abode of the Koya people’s supreme deity.

Ruby Hembrom is an Adivasi cultural documentarian and practitioner based in Kolkata. She is the founder and director of adivaani (first voices), an archiving and publishing outfit of and by Adivasis (the indigenous peoples of India) started in July, 2012 as a non-profit organisation. She is the writer of adivaani’s Santal Creation Stories for children, a recast of the Santal Creation myths in English and the prize winning Disaibon Hul, on the Santal Rebellion of 1855–57.

The event will be livestreamed at 5pm UK time on OCS’s Youtube channel. Please keep refreshing the page at that time and it will appear on our YT homepage at that time. We will also post the direct link on both this event page and our facebook homepage at 5pm. 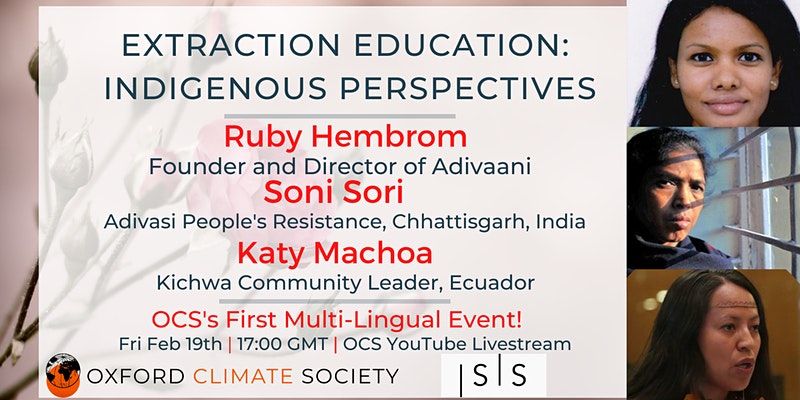