SIGN UP HERE This Green Tease event has been created by Rachel Grant, freelance curator at Fertile Groundwith support from Creative Carbon Scotland. The event brings together a former

This Green Tease event has been created by Rachel Grant, freelance curator at Fertile Groundwith support from Creative Carbon Scotland. The event brings together a former oil worker, activists, researchers, climate and social justice collectives and organisations to discuss their work and reflections on Energy Politics and Just Transition in Scotland.

Energy systems; coal, oil, renewables help shape our economic and political structures.The discovery of oil in the North Sea in the late 1960’s transformed the UK as a much-needed source of energy security and as the UK gateway to the industry, came to dominate Aberdeen’s economy. Energy transition for Aberdeen and the wider North East remains a complex and challenging concept; from the failure of current renewable energy investment to provide meaningful work, to the lack of engagement with wider communities affected by energy transition.

Our speaker’s presentations speak to these concerns, Ewan Gibbs’ presentation will reflect on oil and Scottish Nationhood. Platform and Friends of the Earth Scotland will share their ongoing collaborative work working with and consulting offshore oil and gas workers on what they want to see in the energy transition. Neil Rothnie will share some of his experiences and reflections on Just Transition as a former oil worker, trade unionist, founder of ‘Blow Out Magazine’ and latterly a climate activist.

Energy Politics and Just Transition is an event programmed as part of CRUDE, an exhibition exploring our complex relationship to crude oil. Focused on the sticky interplays of politics, culture and ecology through newly commissioned works from artists and writers; Ashanti Harris, Alison Scott, and Shane Strachan. The project is curated by Fertile Ground, the critical platform of freelance curator Rachel Grant.

The project has been supported by the National Lottery through Creative Scotland’s Open Fund: Sustaining Creative Development and Look Again. The exhibition is open from the 27th August to the 12th of September. With an opening night on the 27th August 6-7.30pm. To visit the show please visit our webpage for full details of the opening hours.

Ewan Gibbs lectures in Economic and Social History at the University of Glasgow. His research interests include working-class politics and protest, collective memory, deindustrialization and energy history. Ewan published his first book, Coal Country: The Meaning and Memory of Deindustrialization in Postwar Scotland, earlier this year. He is now completing a Carnegie Trust Research Incentive Grant project on fuel economies and arguments for Scottish independence, with a focus on the evolving position of North Sea oil and gas in nationalist perspectives. Next year, Ewan will begin a three-year British Academy-Wolfson Fellowship themed on community, labour and the environment in energy transitions through studying the development of oil, nuclear and renewable infrastructures during the UK’s long movement out of coal.

Friends of the Earth Scotland (FoES) campaigns for socially just solutions to environmental problems and to create a green economy; for a world where everyone can enjoy a healthy environment and a fair share of the earth’s resources. Climate change is the greatest threat to this aim, which is why FoES is calling for a just transition to a 100% renewable Scotland through a well-managed phase-out of oil and gas production in the UK.

Platform is an environmental and social justice collective based in London with campaigns focused on the global oil industry, fossil fuel finance and building capacity toward climate justice and energy democracy. Platform’s Just Transition campaign seeks a well-managed, worker-led phase-out of oil and gas production in the North Sea. The campaign is focused on increasing worker consultation and power over policy decisions related to an oil and gas phase-out.

Neil Rothnie is a former oil worker and much of his life has revolved around struggle against the oil and gas industry. Neil spent his working life offshore mostly as a mud engineer and worked primarily on the North Sea and latterly in the Norwegian sector. In the early days of the industry on the North Sea he was active in the Aberdeen Branch of the National Union of Seamen. During the strikes and occupations after the Piper Alpha disaster, led by the OILC he founded and edited Blow Out Magazine a magazine that aspired to give oil workers a voice. He was an active member of RMT and remains a member of the Norwegian union, Industri Energi. Inspired to join the struggle against climate change he has joined Extinction Rebellion and is also active with Scot.E3

If you have any accessibility requirements or anything that would make it easier for you to attend this event, please get in touch with [email protected]

We will continue to monitor the covid-19 situation in the lead-up to this event and will plan safety measures such as social distancing, mask-wearing, or ventilation. Everything we do will be in line with any Scottish Government regulations but we may go beyond these if we feel it is needed to make attendees safe and comfortable. 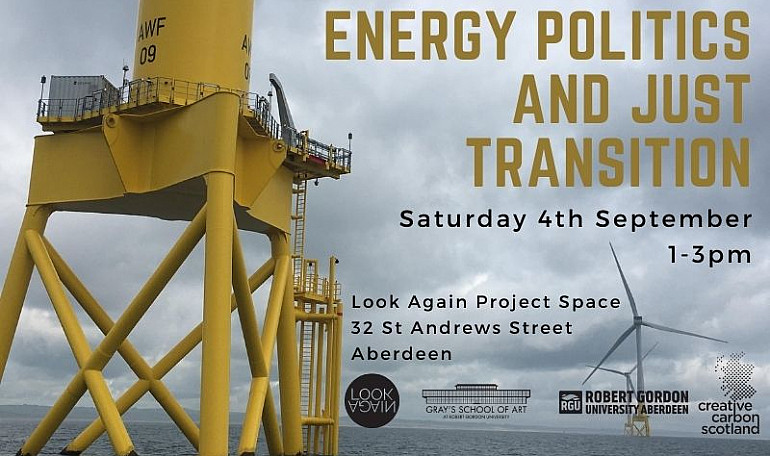