MPD A Recital for Peace: JAMES GILCHRIST and ROGER VIGNOLES

Event Link Here  …in songs by Mozart and Beethoven, and by English composers Jonathan Dove, Gerald Finzi and Ivor Gurney. The event will be streamed live on YouTube, broadcast from

Event Link Here
…in songs by Mozart and Beethoven, and by English composers Jonathan Dove, Gerald Finzi and Ivor Gurney.

The event will be streamed live on YouTube, broadcast from London with professional audio-visual equipment and filmmakers.

How to watch
Book for free or buy a pay-as-you-wish ticket. After registering for the event, there will be an onscreen message with the concert link. You will also receive the details on your order confirmation email.

Dove from Under Alter’d Skies:

Thy voice is on the rolling air

Orpheus with his lute

Biographies
James Gilchrist began his working life as a doctor, turning to a full-time career in music in 1996. His musical interest was fired at a young age, singing first as a chorister in the choir of New College, Oxford, and later as a choral scholar at King’s College, Cambridge.

James’ extensive concert repertoire has seen him perform in major concert halls throughout the world with conductors including Sir John Eliot Gardiner, Sir Roger Norrington, Bernard Labadie, Harry Christophers, Harry Bicket and the late Richard Hickox. In J.S. Bach’s great Passions of St John and St Matthew, James works consistently at the highest level and is recognised as the finest Evangelist of his generation; as one recent BBC Proms reviewer noted, ‘he hasn’t become a one-man Evangelist industry by chance’. https://www.jamesgilchrist.co.uk/

Roger Vignoles is one of the most distinguished piano accompanists of our time. In a career spanning five decades he has become recognized throughout the world as a leading exponent of the art of song.

Roger Vignoles is a Patron of MPD. 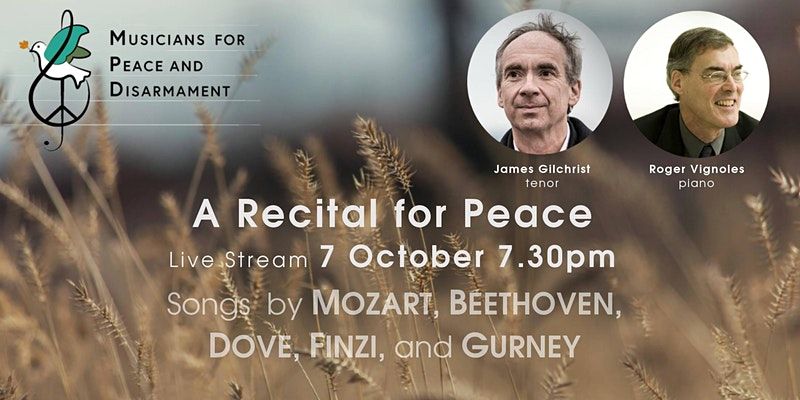