Resilience in a Time of Crisis

Our Village Virtual is a 5-day community, online event that brings together indigenous peoples, influencers, youth voices & allies. It’s where we share, connect and communicate how to expand and

Our Village Virtual is a 5-day community, online event that brings together indigenous peoples, influencers, youth voices & allies. It’s where we share, connect and communicate how to expand and heal our planet.

🌎 Join the conversation, register at https://OurVillage.us

What is there to believe in? Spirituality in a Time of Crisis

In a world angry about racial inequality we hear from those on the frontlines – our opening session will be with Mina Setra, Celia Xakriabá and Rev Yearwood, a moment to reflect on injustice and the state of our world today. Followed by a Guardians of the Forest update on Covid-19, from Rukka Sombolinggi, Levi Sucre, Sonia Guajajara, Olo Villalaz, Eric Marky Terena and Erisvan Guajajara. As well as an update by Amazon Frontlines on community resilience, photography exhibition and a musical performance from Kaê Guajajara.

How do we stop forest fires? Using tech and fighting fires

On Tuesday we’ll be joined by Daniel Haratuma Javaé, indigenous fire fighter, plus leading researchers and climate experts for a press conference on fires, respiratory health and community monitors. Followed by a curated photo exhibition from local photographers on the community response to forest fires. The second half will explore the use of technology for community monitoring, from GPS mapping and new tools to the latest drone technology. Joined by Jessica Webb, Carlos Doviaza and Byron Hernández.

How do we stop exploiting our planet? Tactics to stop extraction

Dallas Goldtooth, Bernadette Demientieff and Tara Houska hold a special discussion on Stopping the Money Pipeline: Indigenous-led Efforts to Defund Fossil Fuels with Rainforest Action Network. With Poder and Peru Equidad we’ll explore deadly extractives and how to fight them. Rainforest Foundation US will lead a panel on their latest campaign stopping illegal gold mining in Brazil  joined by Dario Kopenawa Yanomami. And finally, with CONAQ and the Hip Hop Caucus, we’ll explore how the consequences of extraction in Brazil connect to the Black Lives Matter movement in America.

What brings us together? Looking at the big picture

Hosted by Yeb Sano, with live mural drawing by his brother AG Sano, we’ll explore cosmology. Kicking off with a conversation between an astronaut, a religious leader and an Indigenous leader, Jessica Meir, Dr. Audrey Kitagawa and Rukka Sumbolingi respectively, facilitated by Kaitlin Yarnial from National Geographic. Following that blockbuster panel we will learn about NASA’s partnership with indigenous communities through satellite based spatial mapping and we will understand true community resilience from Indonesia and Costa Rica. We’ll also be joined by the recently announced 2020 Equator Prize winners followed by indigenous music from Toraja, Indonesia – Tendoki.

How do we tell our story? Storytelling for a new generation

For the final day of Our Village we’ll explore communication. Starting with a premiere of Re-inventing Reforestation – New technology and blockchain based direct finance to empower communities from Rainforest Foundation US. Ecuadorian Indigenous storyteller Leo Cerda will lead a session on community smartphone documentation. Actor-turned-activist Bill Pullman will host a live watch party of indigenous films, before a discussion on amplifying community storytelling with Mina Setra, Jonathan Watts, Mongabay and National Geographic. We’ll close with Guardians of the Forests final remarks and a live DJ set from Eric Terena. 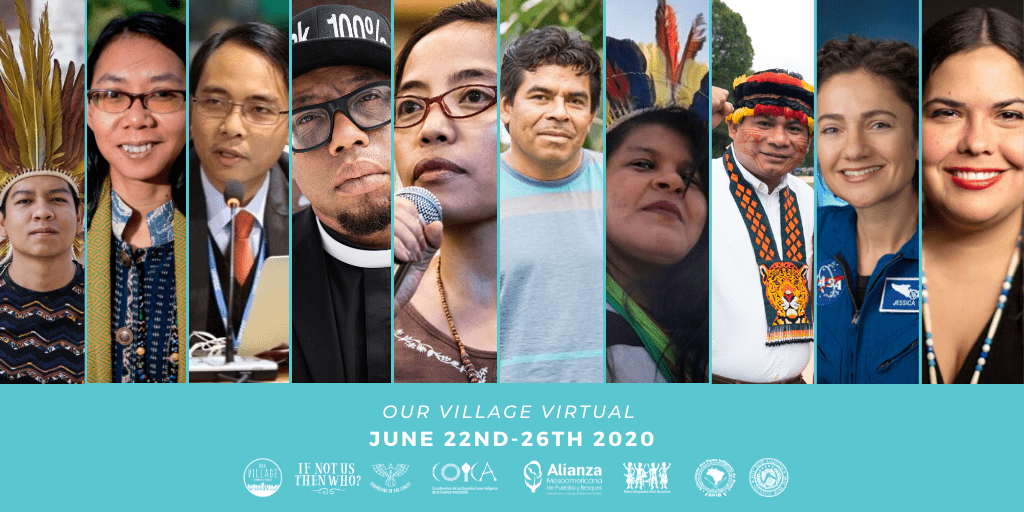 If Not Us Then Who?

We are exploring one key element of the climate crisis by asking a very basic question – who is protecting our forests?