29jan4:00 am6:30 amRevisioning Recovery: Films Uncovering the Roots of DisasterAn incredible film screening, Revisioning Recovery illuminates the current injustices, systems at play, and the solutions needed to prepare and respond to climate disasters.4:00 am - 6:30 am OrganiserWorking FilmsEvent TypeCultural, Arts & Social

Register here. Join us for this film screening and panel discussion hosted by the Institute for Climate and Peace

Join us for this film screening and panel discussion hosted by the Institute for Climate and Peace and Working Films.

The link to join will be posted here 2 days before the event.

The effects of climate change are unfolding before our eyes as hurricanes, wildfires, floods, subzero temperatures, and tornadoes ravage the nation and the globe. Many communities who survive climate disasters do so with limited to no resources and are often struggling to recover before the next disaster hits. Equitable disaster preparedness and recovery is increasingly urgent as COVID-19 further exposes cracks in the system.

Revisioning Recovery illuminates the current injustices, systems at play, and the solutions needed to prepare and respond to climate disasters. The short films bring overlooked stories into the light and expose the historical inequities that are exacerbated when disasters hit.

Across the globe, communities are experiencing the same discrimination that is present in all disaster response. Black and brown individuals, low income communities, undocumented residents, people with disabilities, and older adults are constantly an afterthought. Revisioning Recovery uncovers the root cause of these inequities, dismantles age old narratives, and advocates for new ways forward that provide Just Recovery for all.

This event is presented by: The Institute for Climate and Peace and Working Films.

This event will include a live viewing of Revisioning Recovery and Our Atoll Speaks (Directed and produced by Gemma Cubero del Barrio).

Following the films, there will be a post-screening discussion featuring:

Leanne Kaʻiulani Ferrer is the Executive Director of Pacific Islanders in Communications (PIC). She is an award-winning filmmaker and has more than 30 years of experience in the film and television industry. Leanne has been with PIC for 12 years where she is responsible for the overall health of the organization while building networks and strategic partnerships.

Vilsoni Hereniko grew up on Rotuma, Fiji, for the first sixteen years of his life. The youngest of eleven children, he is the first Rotuman to hold a Ph.D. as well as become a professor, playwright, and filmmaker. He’s also a former Director of the Oceania Centre for Arts, Culture, and Pacific Studies at the University of the South Pacific in Fiji as well as the Center for Pacific Islands Studies at the University of Hawaiʻi. Today, he teaches screenwriting as well as indigenous film production and film studies at the Academy for Creative Media at the University of Hawaiʻi. He has a large body of creative and scholarly work, many of which focus on the arts and cultures of Oceania. In 2015, he wrote, produced, and co-directed a major stage production on climate change that toured Brussels, Copenhagen, Norway, and Scotland, drawing international attention to one of the most pressing issues facing small islands in the middle of the Pacific Ocean, that of sea-level rise.

Anthony Aalto is a British-born American documentary filmmaker and journalist. He founded Honolulu-based Green Island Films in 2012 with his partner Mike Hinchey. Prior to moving to Hawai‘i with his family in 2006, to be the Pacific Rim correspondent for the Portuguese newspaper Expresso, Anthony reported from more than two-dozen countries around the world under the byline of Tony Jenkins, including stints as a war correspondent for The Guardian, The BBC and The Economist. He’s a former Fellow of the Center for International Policy, was twice elected president of the United Nations Correspondents Association, and for three years hosted World Chronicle, a talk show on CNBC. He chaired the O‘ahu Group of the Sierra Club for several years and still serves on its board.

Anthony was raised on the island of Lānaʻi. He attended the Academy for Creative Media at the University of Hawaiʻi, Mānoa and graduated with a bachelor’s degree in film production in 2008. Following college, he worked on numerous commercials, television series and theatrical films such as Hawaii 5-0, The Tempest and The Descendants on Oʻahu. After returning home to Lānaʻi, he started his own business, Kekulamamo, to offer video services to local non-profits and individuals. In his spare time, Anthony also mentors film literacy and production classes and hosts visiting film events such as the ʻOhina Short Film Showcase.

Gemma is the director, and founder of Talcual Films, a documentary production company. Gemma was born in Spain but had been living in the United States for more than two decades. She was trained as a journalist and has a passion for non-fiction storytelling. During the 20 years she has worked in documentary films, Gemma has made films in Spain, United States, Mexico, Cuba, Germany, Argentina, Hawai’i, and the Cook Islands. Her short film Our Atoll Speaks premiered in New Zealand at the 2019 Wairoa Maori Film Festival, traveled through Aotearoa with the New Zealand International Film Festival within the Pasifika Shorts, opened the Te Tuki International Film Festival in Rarotonga and screened on National Television in the Cook Islands. In 2020 the film premiered in Spain at SECIME. The film was awarded the Coastal Culture Award at the 17th International Ocean Film Festival and won the Special Jury Award for Best Documentary Short at the 2020 Guam International Films Festival. Through 2021 Our Atoll Speaks will keep travelling the world with premieres at FIFO in Tahiti and the Melbourne Women in Film Festival in Australia.

The films will be available in English with options for English and Spanish subtitles and English audio description. Please fill out the following form by January 20 to request accessibility services for the discussion portion of the event: bit.ly/revisioningaccess. 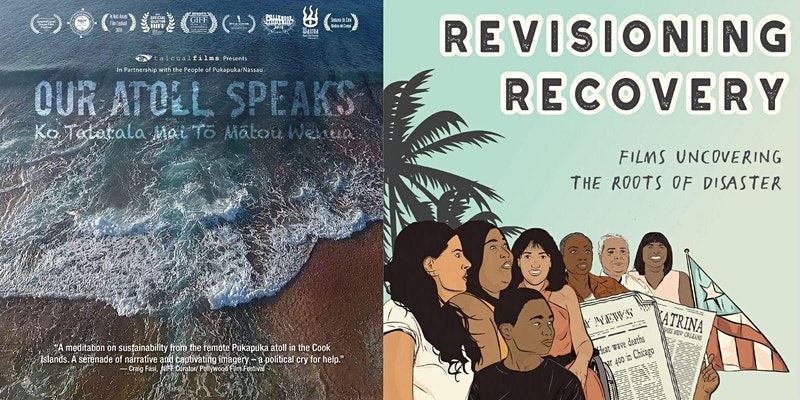 Working Films uses documentaries to advance social justice and environmental protection. Recognizing the power of film to inspire, we use documentaries to increase civic engagement and shift culture at the local, state, and national level. We offer funding and in-kind support to underrepresented filmmakers. And, we share our learning and foster dialogue to further the field of documentary for change. We lead conversations and trainings with nonprofits to ensure that nonfiction media is increasingly embraced as a critical resource in their strategies for social change. Our work is made possible with generous support from the Arthur M. Blank Family Foundation, Ford Foundation, John D. and Catherine T. MacArthur Foundation, Kendeda Fund, Perspective Fund, Putnam Foundation, Southern Partners Fund, the Z. Smith Reynolds Foundation, and individual donors.