Seven global campaigners try to harness the only force that can prevent catastrophic climate change: the will of the people  7.00pm-9pm Friday 15 October FILM Chat in person

A
documentary (72 mins) – to be followed by an informal discussion and
introduction to what is coming up locally in Edinburgh which people can
get involved with. All welcome.

If National Governments can’t solve the climate crisis, who will?

Not
Without Us follows seven grassroots activists from around the world to
the 21st U.N. Climate Talks in Paris. The effects of climate change on
their lives reveal what’s at stake if a strong agreement to limit carbon
emissions is not reached. Yet, the landmark Paris Accord, signed by 192
nations, is non-binding and fails to mention the main cause of global
climate change: fossil fuels. How could this be?

Not
Without Us connects the dots. Between the inability of the U.N. process
to address climate change and Big Oil’s control over governments.
Between the greatest economic inequality in the history of mankind and
the oncoming climate disaster. Between a fossil fuel driven economy and
the 1% who control it.

Not Without Us shows the
importance of grassroots groups to empower mass movements to create the
system change we need. Real change that comes not top down, but bottom
up, organised by social movements to harness the great power we have:
humanity.

A Take One Action screening from the
Edinburgh COP26 Coalition bringing together Friends of the Earth, Scot
E.3, Transition Edinburgh, Our Future Edinburgh, Trades Unionists and
many more concerned to alert Edinburgh to the challenge of achieving
real progress at the UN Climate Conference due to take place 1-12
November in Glasgow. 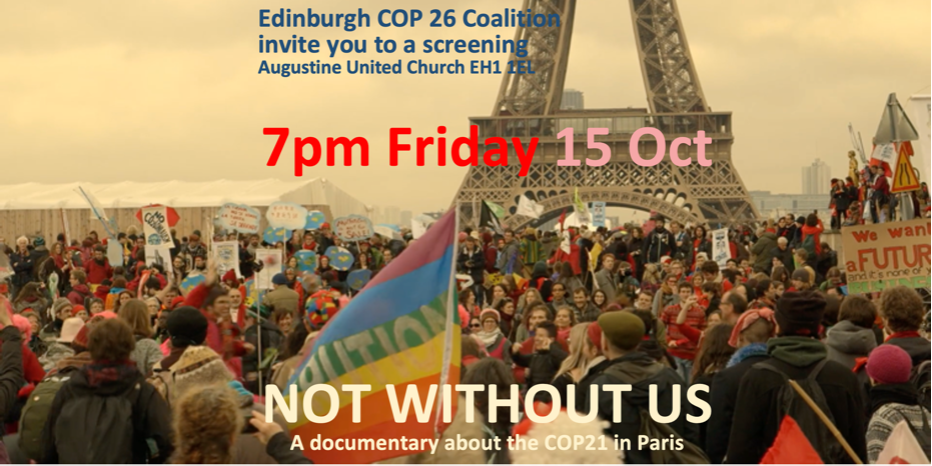