28jan7:00 pm8:30 pmSession #1: Anticapitalism and ImaginationWhy is the U.K. government afraid of anticapitalism? Why is it being barred from schools? Why now? And how can we teach anticapitalism?7:00 pm - 8:30 pm Organiser: The Left Book Club Event Type:Webinar & Talks

Register here. ***This event will be livestreamed on YouTube. Please register on Eventbrite for the YouTube Livestream link!***

In 2020, the UK government barred anticapitalist education materials from schools, dubbing it as an ‘extreme political stance’. The policy which has been referred to by commentators as McCarthyist goes further than any British government has gone even during the Cold War.

We’ve organised a series on anticapitalism with Gargi Bhattacharyya to explore what we’re all thinking… Why is the U.K. government afraid of anticapitalism? Why is it being barred from schools? Why now? And how can we teach anticapitalism?

After a popular series intro, we are thrilled to announce that, this month we are discussing Anticapitalism and Imagination with Gargi Bhattacharyya and incredible guest speakers Lola Olufemi and Harsha Walia, chaired by Dalia Gebrial.

Gargi Bhattacharyya is one of the UK’s leading scholars on race and capitalism. She is the author of Rethinking Racial Capitalism (2018), Dangerous Brown Men (2008), Traffick (2005) and co-author of Empire’s Endgame (2020).

Harsha Walia is the author of the upcoming book Border and Rule: Global Migration, Capitalism, and the Rise of Racist Nationalism. She is also the award-winning author of Undoing Border Imperialism, co-author of Never Home: Legislating Discrimination in Canadian Immigration as well as Red Women Rising: Indigenous Women Survivors in Vancouver’s Downtown Eastside. Harsha has organized in migrant justice, anti-capitalist, feminist, abolitionist, and anti-imperialist movements for the past two decades. She has been involved in grassroots movements including No One Is Illegal, Defenders of the Land, and Women’s Memorial March.

Lola Olufemi is a black feminist writer, organiser and researcher from London. Her work focuses on the uses of the feminist imagination and its relationship to political demands and futurity. She is author of Feminism Interrupted: Disrupting Power (2020) and a member of ‘bare minimum’, an interdisciplinary anti-work arts collective. Her forthcoming book, ‘Experiments in Imagining Otherwise’ (Hajar Press, 2021) will be published this year.

Dalia Gebrial is a PhD candidate at LSE looking at race and the digital economy. She is also an associate contributor at Novara Media and co-author of Empire’s Endgame: Racism and the British State (Pluto, 2021). 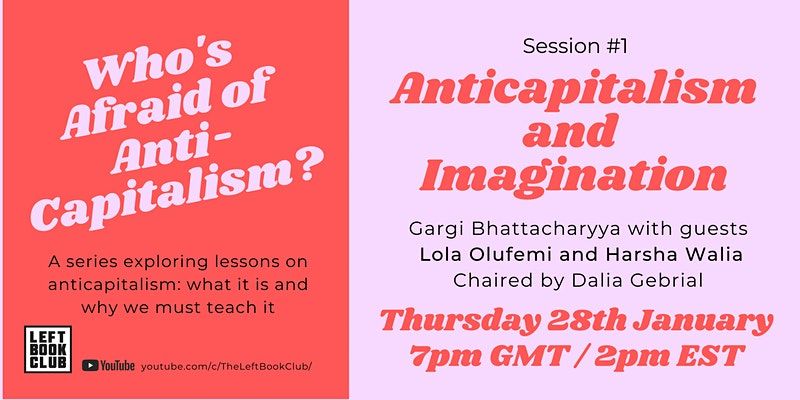