A series of online events that bring together diverse voices to share knowledge, experience and to inspire us in the run up to COP. Sign up below for our live events & scroll down for more…

All events will take place on Zoom with a dial in option. If you have a question, or would like to request any support to make it easier to take part, please contact tami@stopclimatechaos.scot. We can assist with Closed Captioning and provide a BSL Interpreter, but please give us some notice : )

If you are a small group wishing to run a climate event and don’t have your own professional zoom account we can help – email us.

Find events from across the movement.

There is a lot of talk about the importance of tree planting and in reducing deforestation, in dealing with climate crisis.  Scottish Government have ambitious tree planting targets, and COP26 will include discussions on how to reduce deforestation world-wide. But what is the best way of achieving this?  Is this just about emissions or are there other things at stake?  Where do people fit into woodland restoration, rewilding and forest conservation?

This conversation between Alan McDonnal of Trees for Life, Veronique Walraven of Morven Community Woodlands, and Sarobidy Rakotonarivo, a research fellow at Bangor University based in Madagascar, will explore how forest conservation and woodland restoration can best deliver climate mitigation, the co-benefits that arise, and the role of local communities in delivering them. The event is chaired by Kat Jones at SCCS, 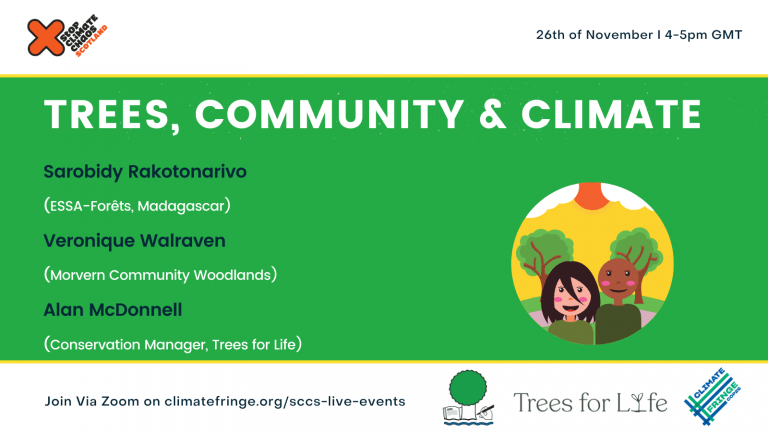 Sarobidy is an environmental socio-economist with an interdisciplinary background in natural resource management.

Originally from the Netherlands, I have made Lochaline in the remote Morvern peninsula my home for the last 13 years. Although my day job is working as an office manager, my back ground is in theatre, and I am particularly interested in outdoor theatre in a natural environment.

I'm Trees for Life's Conservation Manager, having worked with SNH for fifteen years in the often tense space between formal conservation, landowners and communities in the Inner Hebrides, mainland Argyll and the Trossachs, I now have an opportunity to apply what I've learned from a lot of previous mistakes!

This event is powered by Stop Climate Chaos Scotland

At COP26, the need for finance for mitigation, adaptation and loss and damage, will be a key priority for global south countries currently facing the climate emergency. The SCCS and Jubilee Scotland report ‘Financing Climate Justice’, outlines the need for increased climate finance to global-south countries hit hard by climate change, and Scotland’s role in creating such change.

We will hear from Saleemul Huq, Director of the International Centre for Climate Change and Development (ICCCAD) at Independent University, Bangladesh, Sadie De Coste, an activist and researcher and co-founder of the Loss and Damage Youth Coalition, and Anne Funnemark of Jubilee Scotland.

The event will illustrate the need for climate finance support for the global south communities which have contributed little to creating the climate crisis and are already suffering devastating consequences. It will show how Scotland can act on its commitment to climate justice through increasing its climate justice fund and championing championing finance for the global south at COP26. 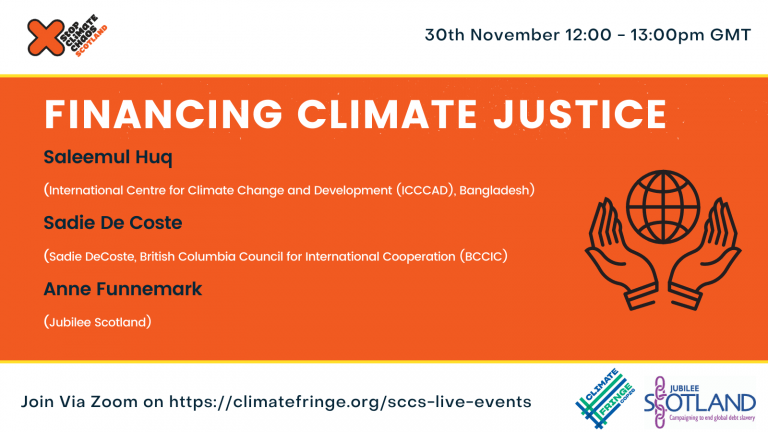 Join us with some mulled wine and mince pies for the the Climate Fringe Winter Social!

This event is an informal get-together, and relaxed
networking to reconnect when face-to-face is more challenging.

Let’s come together and share stories . We want to hear about the wonderful projects you’ve been part of this year.

It’s time to take off our professional hats and put on our festive attire. Expect story telling, music and fun & games. 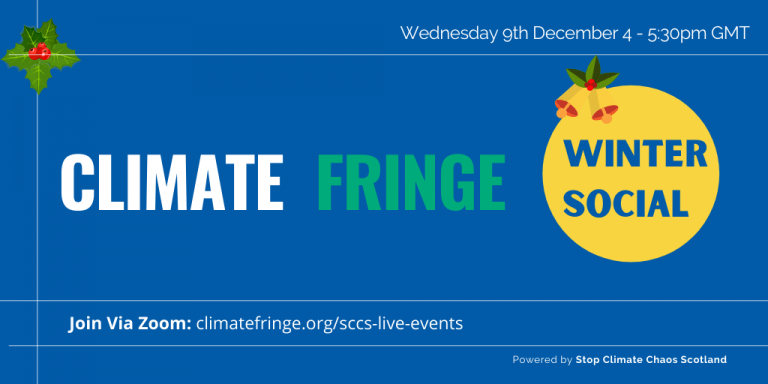 You can catch up with our past events here.

Stop Climate Chaos is curating this series but it is open to all,  if you would like to run your own event from The Climate Fringe please email tami@stopclimatechaos.scot.