First Round Awards of the Community Fund 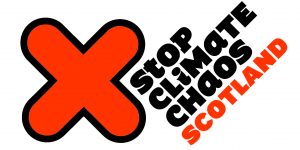 Feminist Economic Football: An outdoor event taking the form of a co-operative 5-a-side, three team football match. The match will be a live event, which can be attended by a socially distant audience – thereby enabling us to connect with people who are not using, or do not have easy access to, digital platforms. The event will also be filmed and the film shared through online screenings. We hope to be able to show this film in venues such as the Queens Park arena, GAMIS and CCA Glasgow.

This project will continue FEN’s work of bringing ideas of feminist economics, decolonisation and de-growth to a local audience through playful and creative means. With the Covid crisis highlighting the visible problems of capitalist structures and economies, this project could not be more timely – especially as we are seeing increasing shifts in common language towards solidarity economies, mutual aid and collaboration. These concepts are at the heart of feminist economics and are ideas that we have been working on with the local community through the Swap Market project since 2018.

The 5-aside match will be based on the rules of three-sided football, as developed in 1960s by anarchist groups and Situationists. These groups were keen to use the game of football to explore how co-operative behaviours can help break down the competitive basis of capitalist organisation.

For our match there will be three feminist football teams with each team representing a key theme relating to the need for a new economic model: Themes we are looking at are: Decolonisation, Degrowth and Climate Action. The themes will have enough overlap for the need for collaboration, but enough difference to necessitate the negotiation of key priorities.

Live football commentators will comment on the alliances and connections made across the three teams. This will be narrated in a fun, accessible way (in the style of traditional football commentary which is usually a male dominated domain). We will invite three feminist speakers who have delivered talks or workshops as part of our Swap Market programme to act as commentators for the event.

Football strips for the three teams will be imaginatively upcycled from donated kit.

We will be recruiting footballers through the extensive Swap Market membership and local groups we know and work with including: GBCT, SEIN, Romano Lav, Amina Muslim Women’s Resource Centre, Category Is Books, Unity Sisters and the All genders trans inclusive footballers group.

Our core team includes members who identify as disabled and women of colour and we will ensure that the commentators and footballers recruited are representative of the diversity of the local area. We will be extending invites to female-identifying and non-binary footballers.

We are planning to make a publication that will appeal to both children and adults but will have children as its central audience. Ideally we would like to offer a copy of the publication to every primary school in Glasgow and have additional copies to sell. There is also the possibility of creating a basic website to support the publication with links to online resources.

The publication will, through considered illustration and straightforward though poetic prose, explore the dark and the brave aspects Glasgow, it’s connection to the Industrial Revolution, colonialism and extractivism, through the stories and memories of Glasgow activist throughout the ages. The story will be told by a good friend of St Mungo, the robin, who will speak to Youth Climate Strikers, the Birdman of Pollok, the Georgian environmentalist Angus Smith, New Scots and more. Each of these encounters will join the dots between social justice and climate justice but also leave the reader with hope that collective action can bring about meaningful change.

We are currently developing a series of events, public interventions and localised responses to Glasgow’s COP26. One particular theme we are very keen to get support with is to invite  members of our community, local community groups and their service users to create a “Govanhill Climate Manifesto”. The project will to consult, seek responses and solutions in order to devise a public declaration of policy and aims specific to our area and our community.

Through monthly online and in person climate focus cafes, we aim to engage with hard to reach communities such as survivors from torture, asylum seekers and refugees, disadvantaged women in sheltered housing and other community members to discuss climate change and how it affects their lives and impact on their aspirations for the future.

We also aim to animate the “Govanhill Climate Manifesto”and bring it to life through a series of performative work and/or installation pieces created by local artists, showcased, shared and displayed on the lead up to COP26 in November.

The initiative will enable our community to re-imagine current political rhetoric and allow for a coherent alternative which relates closely to its needs.

We hope to galvanize our community to respond to climate related issues, current environmental policies and provide an urban community campaign framework for change. The Govanhill Climate Manifesto will provide a contextualised visualization of climate impacts with tangible community voices at its core

Mend it, make it, grow it crafting sessions showing participants how to mend things rather than throwing out or replacing with new.  Also how to recycle plastics and other household waste materials into bespoke jewellery, picture frames, paper weave storage baskets, and planters to grow herbs at home, etc.

Gilded Lily CIC are based in the Govan community in which they work. Their workshops are about building confidence, connections and skills and so the up-cycling is not the end in itself, it is the community development and personal development that takes place. 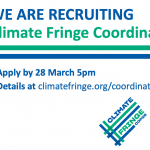 Previous Story:
Could you be our new Climate Fringe Coordinator? 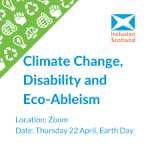