This Campaign has now finished 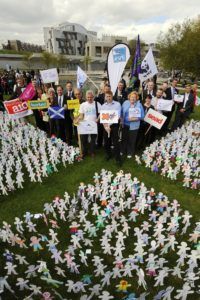 Our coalition initially came together to campaign for an ambitious and world-leading climate change law for Scotland.

As a result of our tireless campaigning efforts, in June 2009, MSPs at Holyrood unanimously passed the Scottish Climate Change Act. It included ambitious commitments to reduce Scotland’s emissions by 42% by 2020 and by 80% by 2050, compared to 1990 levels. At that time it was the most ambitious climate legislation anywhere in the world.

John Swinney MSP said of our campaign: ”Many of the non-governmental organisations with whom we have been familiar over the 10 short years of this Parliament have worked together under the Stop Climate Chaos banner to send to Parliament and the people of this country a coherent and co-ordinated message that we should consider and, frankly, be inspired by.

“As a consequence of the commitment and the contribution that has been made by the individuals in those organisations, working hand in hand with members of the public in Scotland…a tremendous range of opinions and ideas has been marshalled, with the result that we can rightly and justifiably claim that the Scottish Parliament will today pass world-leading legislation on climate change that can set an example to others.

“That partnership between the people and Parliament has worked to an extraordinarily successful extent.”