Networking: How YOU can get involved!
Book: https://sccan3mar.eventbrite.co.uk Share

The Scottish Government is supporting SCCAN to invest in ten regional community climate action networks which will then be able to bid to host one of the Scottish Government funded Regional Community Climate Action Hubs. Louisa Harvey will outline the Government’s plans.
Late in 2021 the City of Edinburgh Council awarded a grant to a partnership of Our Future Edinburgh (OFE) and Edinburgh Voluntary Organisations Council (EVOC) to establish a Community Climate Action Forum under their 2030 Climate Strategy.
We hope that Bridie Ashrowan, EVOC CEO, and Charlie Wright, Forum Coordinator – who engages with citizens and groups enabling all to contribute to climate action in the city will share their initial plans.

In person at Augustine United Church, 41 George IV Bridge, Edinburgh EH1 1EL plus we hope some or all of it blended so those prevented can attend online. Doors open at 6.00pm for refreshments and viewing the stalls.

A collaborative event hosted by SCCAN – Scottish Communities Climate Action Network with input from EVOC, Our Future Edinburgh, Edinburgh Climate Coalition and Edinburgh Climate Festival. To be held in person at Augustine United Church with online access via Zoom – link sent to you 2 days 1 hour before. Key contributions will be recorded.
Image: 100,000 in Glasgow at COP26 Day of Action for Climate Justice 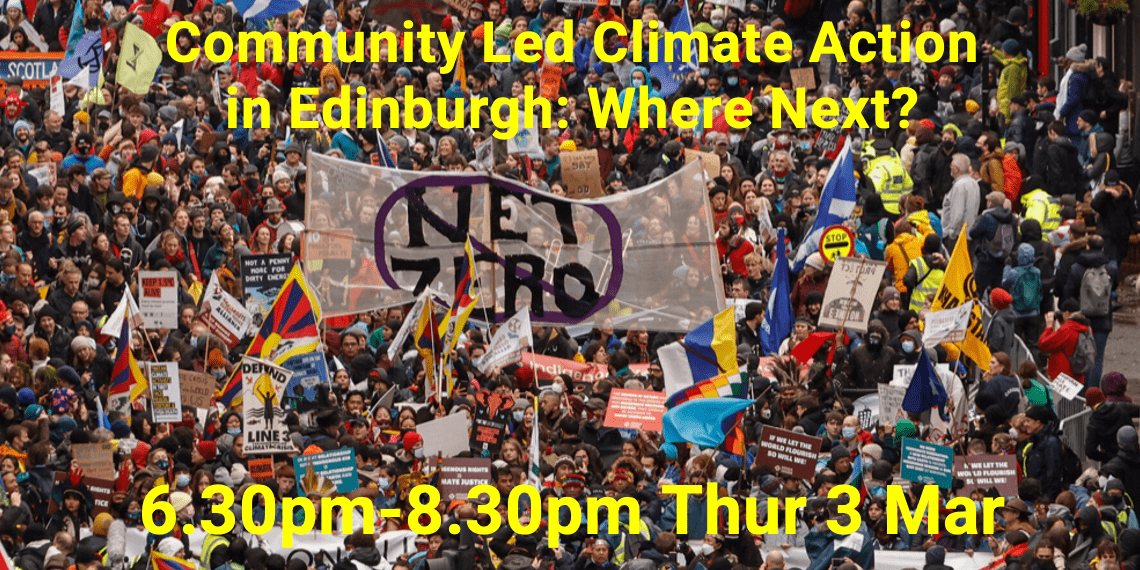