In Conversation with Eilidh Robb from the UK Youth Climate Coalition

In our blogs we are highlighting the work of Activists in Glasgow, Scotland and beyond.  We spoke to Eilidh Robb, the COP26 Coordinator for the UK Youth Climate Coalition on her work with young climate activists and the wider Scottish climate movement.

How did you get started in Climate Activism? What is your involvement in the Scottish Climate movement?

I don’t have a particularly exciting “activism breakthrough” moment – it was more of a series of events that showed me I wasn’t willing to climb through a series of hierarchy hoops to reach a position of “powerful” enough to make change. So I joined the UK Youth Climate Coalition (UKYCC) in 2017 and since then have been fortunate enough to have witnessed and taken part in some amazing work that has been fundamental in making me the person I am today.

Much of that work has happened at the UN Climate talks with UKYCC where I’ve fought to kick polluters out for the last three years alongside some incredible youth activists. Similarly, I’ve worked on some amazing campaigns against false solutions at the EU level, and most recently I’ve been involved with Glasgow Calls Out Polluters – a Scottish based campaign group working to remove fossil fuels from Glasgow in general, and the COP specifically. 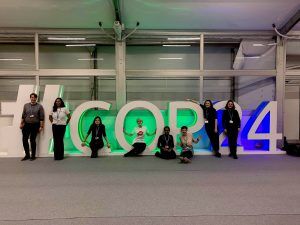 Tell us about the UKYCC and your current role as the COP26 Coordinator.

The UKYCC are an entirely youth-led, decentralised, not-for-profit volunteer group who organise online to mobilise and empower young people to take action for climate justice. We were created back in 2008 with the aim of bringing UK Youth to the UN climate talks – and we’ve been doing that every year since. Today we have around 50 members across the UK working on a variety of campaigns.

Given the non-hierarchical nature of our group, we evolve quickly to reflect the skills and experiences of our members, and as a result UKYCC has changed focus a lot over the three years I’ve been involved. Currently our projects are centered around reinforcing a systems change narrative, encouraging political empowerment in young people, bringing climate justice to COP26, and ensuring that as UK youth, we hold our government accountable on the world stage. My role as coordinator simply means ensuring that we don’t fall apart, and being the accountable person when things inevitably do!

How would you like to see youth climate voices amplified during COP26?

The phrase “young people are the future” gets kicked around a lot – but I think that actually minimises young people’s value in these spaces. Young people are not only willing to shoulder the immense responsibility of climate change, we are already out there demanding action, creating change and holding governments accountable.

I would love to see a COP that creates space for youth leaders and innovators from around the world – those already out there doing the work! Crucially, these contributions must not be another example of #youthwashing – a gross attempt by corporations and governments to prove they are down with the kids. Instead these spaces must provide genuine opportunities to advise, guide and contribute to decision-making on climate action, or at the very least, a space where governments listen and young people do the talking. 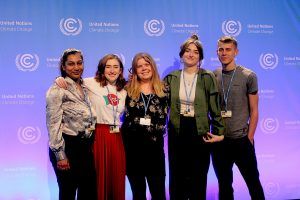 Tell us about something that inspired you in your time running the COP26 group for the UKYCC?

Something I’ve found really inspiring about my time as COP coordinator is the way in which we’ve grown to become a support system for one another. Tackling the systemic injustices in our world can be totally overwhelming and demoralising – but we have become one anothers cheerleaders. We draw inspiration from each other, lean on one another, and share in our collective successes. It’s so easy to get lost running as fast as possible towards the big goal – but taking time to recognise the ways in which individuals are growing, learning and becoming the best climate justice activists they can be (in whatever way feels best for them) has been a surprising bonus that I didn’t expect from this role.

What have you learnt from your fellow campaigners at UKYCC?

How to have fun.

Don’t get me wrong, I am not someone who doesn’t know how to have fun, but my determination to make a difference sometimes focuses more on the ends than the means when it comes to campaigning & activism. I’ve learnt so much about what it means to fight for a better world from other UKYCC members and alumni. I’m thoroughly convinced that if we want to fight for a better future, and get others to do the same, we need to show people that the journey is just as worthwhile as the destination. UKYCC have taught me that, and absolutely remind me of it when I forget!

What hopes do you have for COP26 in Glasgow? What legacy do you think we should be demanding from COP in Glasgow?

I hope that COP26 calls out the Global North’s profit over people mindset – with a spotlight on the UK – in stark contrast to the collaborative, justice oriented work happening all over the world among climate campaigners. The UK plays host to an immense number of climate activists – I hope we can use this momentum to join forces around the world and make it clear that there is no climate solution without justice – we cannot leave anyone behind as we build a better world! 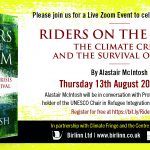 Previous Story:
Riders on the Storm: The Climate Crisis and the Survival of Being 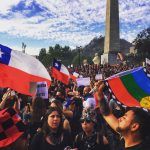