Riders on the Storm: The Climate Crisis and the Survival of Being

Alastair McIntosh’s latest book, ‘Riders on the Storm: the climate crisis and the survival of being’, will be launched in an event co-hosted by the Climate Fringe and the Centre for Human Ecology.  Here Kat Jones of SCCS reviews the book in advance of the event on 13th August.

Alastair McIntosh is the author of, among other things, Soil and Soul, a book that has had a profound impact on many within the environment movement, and so his new book published by Birlinn has been eagerly anticipated.  In ‘Riders on the Storm’, McIntosh brings his soul-centred approach to bear on the issue of the climate emergency, issuing a persuasive call to embrace the spiritual in the climate struggle. McIntosh manages to hold in balance an exploration of the profound depths of philosophy and spirituality, with well-argued support for consensus science.

Riders of the Storm is top and tailed by the story of a delegation of community leaders from West Papua Province, in the Indonesian half of New Guinea, who visited the Hebrides in 2019 to study land reform trusts and community empowerment. This visit and the parallels, commonalities and connections between the West Papuan people and their Hebridean hosts is returned to as an echoed refrain in the fact-laden intervening chapters and in McIntosh’s beautiful use of metaphor throughout the book involving shared concerns of people living close to the land: growing food, sailing, ropes and navigation.

This story and the deeper shared understandings created when Papuan meets Gael, act as a cypher to understand the rest of the book, as well as a framing for the book’s content. As McIntosh explains, “the more we dug into the wider issues of the world, the more we connected the local to the global and saw the patterns of the common cause”.

But before McIntosh gets to the core of his call to the spiritual he takes us on a journey through how we arrived at this point. The main part of the book explores the science of climate and some background to the movement – he is honest about his own experience of reading the IPCC reports (“like ploughing through a soil compacted by compromises, concessions, caveats and counterpoints”). But nonetheless he is an eloquent champion for consensus science, calling out both climate denial and climate alarmists.   McIntosh believes that over-egging the climate pudding risks backlash and even more entrenched positions. “If anything is going to be enough, the unembellished science is quite bad enough to be good enough” he says.

He labels climate alarmism, with its implication that it may already be too late, and that collapse is now inevitable, as a ‘theft of time’, explaining “we have no mandate to collapse the possibilities of the future, to restrict our latitude for agency and action.”

Throughout the book, ‘Love’ is a word that keeps popping up. And ‘Life’, and ‘Community’ and ‘Truth’. Eventually the book circles round again to the Papuans in the Hebrides and the plea to deepen connections with each other and with the spiritual.  McIntosh explains the need for a ‘spiritual activism’ where our work comes, not just from a rational understanding of the science, but also from love.  An exploration of the spiritual origins of non-violence and an examination of the work of Extinction Rebellion makes the case for activists to resolutely stick to a spiritual, rather than move to an instrumental, understanding of non-violent direct action.

This is not just an exploration from the point of view of McIntosh’s own tradition – Hebridean Christianity – it encompasses deep study of other faiths and traditions. Indeed he notes that, when working on land-reform, “the artists, poets and musicians – the faith groups – and all who live and work with the soul- have such important parts to play in opening up the avenues of inner life that flow through to outer life”.

The importance of story – linking past to present and giving a way to navigate the future – is present in much of McIntosh’s writing. Going back to his own roots and the history of the Hebrides, he relates the impacts of lived trauma and oppression and the implication for the brokenness of our systems today. “Colonisation is not just the clearance of people’s lands, it is an ongoing clearance of our minds” he says, acknowledging that the colonised often became the coloniser, with many Scots becoming complicit in slavery in their new lands in the Americas.  The ripples of that are felt powerfully today in white supremacy, and the Scots identity of the man whose mother grew up in a Lewis blackhouse, and now sits in the White House. The ‘festering wound’ of racism and injustice, as McIntosh puts it, shows how “violence, whether suffered or inflicted in its spiral interplay, hollows to the core.”

The chapter pivots on a quote from Colin McLeod, founder of the GalGael Trust, spoken at the end of the motorway protests in Glasgow. “We’ve shown them what we’re against, let’s show them what we are for”.

And thereon follows the core of the book and one which I would have liked to see take up much more space, rather than be contained within two short chapters. It is in these insights that the book stands out among the many other things written about climate in these times and deserved more space.  “What can we do when we wake up and realise that we’ve got to do something?” asks McIntosh, and proceeds to start on an answer in the final chapter ‘Rainmakers’. This is the most profound part of the book and one that, I think, has to start the reader on a journey of their own. Not wanting to deliver any spoilers – but part of the answer has to do with love “let’s name the difference the love can make when worked into social policy”, and in recovering community,

But McIntosh is no ideologue, he is well aware of the difficulties and compromises we all face and in one of his characteristically beautiful phrases puts it thus “as compromised people in a compromising world each of us navigates from where we’re at with one eye to the ground, but the other to the stars”.

And this is really at the centre of McInotsh’s book and what it achieves. ‘Riders on the Storm’ has the unusual combination of pragmatism, when it comes to the science and the politics, and an uncompromising passion and integrity, when it comes to personal engagement and connection.  He has made a good case that this balancing act offers a way to engage fully, honestly and with coherence, even in a world of confusing dissonance.  “What if climate change was an opportunity to deepen our humanity” he asks, and this is where we, as readers, are left.  This book left me with more questions than answers but these are questions that issue a call to deeper thought and contemplation of our own humanity, and what it is that we contribute to community.

Previous Story:
Creative Approaches to the Climate Crisis in the Time of Coronavirus 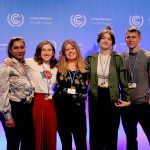 Next Story:
In Conversation with Eilidh Robb from the UK Youth Climate Coalition
↑
X
X